Near East Preschool and Near East Primary School is celebrating the April 23 National Sovereignty and Children's Day 100th Year online due to new types of Coronavirus outbreak measures.

Celebration events, where the enthusiasm of the children on April 23 will be carried out in the house, will start at 10.30 in the morning with the children standing in Atatürk's presence and reading the National Anthem. Within the framework of the celebratory activities, poems will be read, songs will be performed, dances will be made and children will convey their messages. The 23rd April National Sovereignty and Children's Day 100th Anniversary celebration can be watched live on the official facebook page of the Near East Primary School (YakinDoguilkokulu). 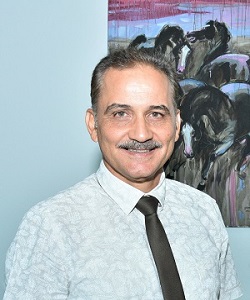 Ertan Aligüllü: "We want the hearts of all children to beat with the same emotions ..."
The head of the Near East Schools Primary Education Ertan Aligüllü said that the National Sovereignty and Children's Day, which was presented to the children by the great leader Mustafa Kemal Atatürk, is the scene of various activities and visual shows every year, and it will be celebrated online for the first time at home within the scope of the measures taken against the new type of Corona Virus. Aligüllü said: “Here, we, as Near East Preschool and Near East Primary School, have a live online broadcasting in collaboration with our children and families to celebrate April 23, to feel its importance and to commemorate the Great Leader Mustafa Kemal Atatürk with love and respect.”

Stating that the celebration of the Natioan Day altogether is irreplaceable, Aligüllü said that they have prepared an event program to celebrate the 23rd of April with the activities to be held at home and to share this enthusiasm with the children. Expressing that April 23 is the foundation of a world where all humanity can live in peace and by strengthening the bonds of love, brotherhood and friendship among the children of the world, Ertan Aligüllü said: “April 23 is the day when the one-man government ends and the will of the people takes over. On April 23, 1920, the spirit of the people's struggle for salvation and the unprecedented leadership of Atatürk have set an example for many nations. Also, April 23 has a special importance as it is the first Children's Day celebrated in the world. April 23 is the story of a nation that has risen from nothing. April 23 is the day when the Turkish nation became one soul in the fight of freedom and existence. Let the imagination of the children be endless. I congratulate the 23rd April National Sovereignty and Children's Day of all of our children, and wish our children a healthy and happy future, whose ideas and consciences will entrust our future and lead to free generations ”.