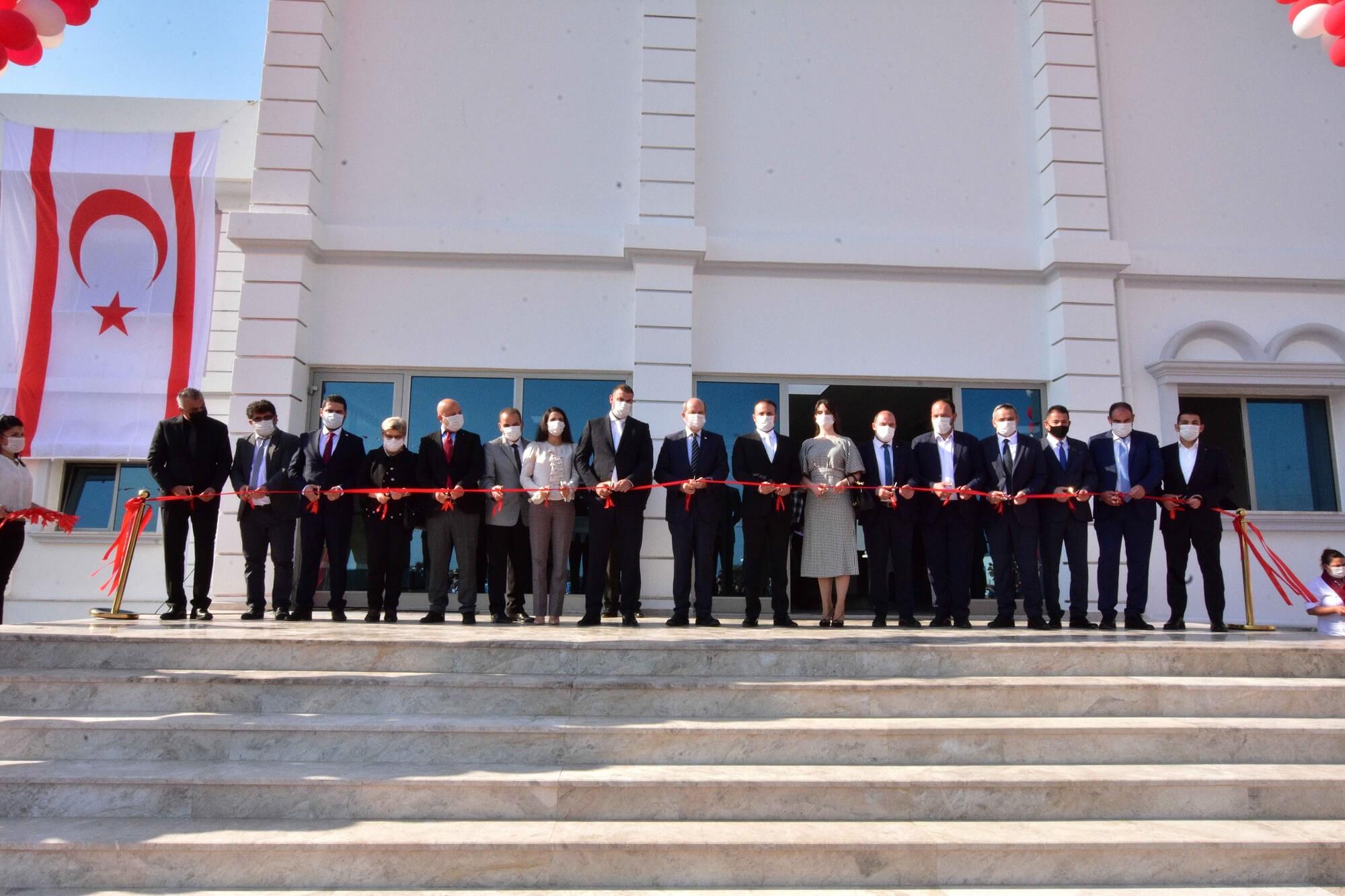 At the ceremony, which started with a moment of silence and the singing of the National Anthem, Near East Yeniboğaziçi Primary School's choir music teachers Cemre Arca and Melek Tutku performed the anthem of the Republic. At the ceremony, Near East Secondary Education Director Asım İdris, Near East Elementary Education Director Ertan Aligüllü, Vice-Rector for Near East Primary and Secondary Education Assoc. Prof. Dr. Murat Tüzünkan, Chairman of the Board of Trustees of Near East University Prof. Dr. İrfan Suat Günsel and President Ersin Tatar each made speeches. President Ersin Tatar also took a photo with the choir of Near East Primary School students and made observations at the Near East College Yeniboğaziçi Campus after the opening. 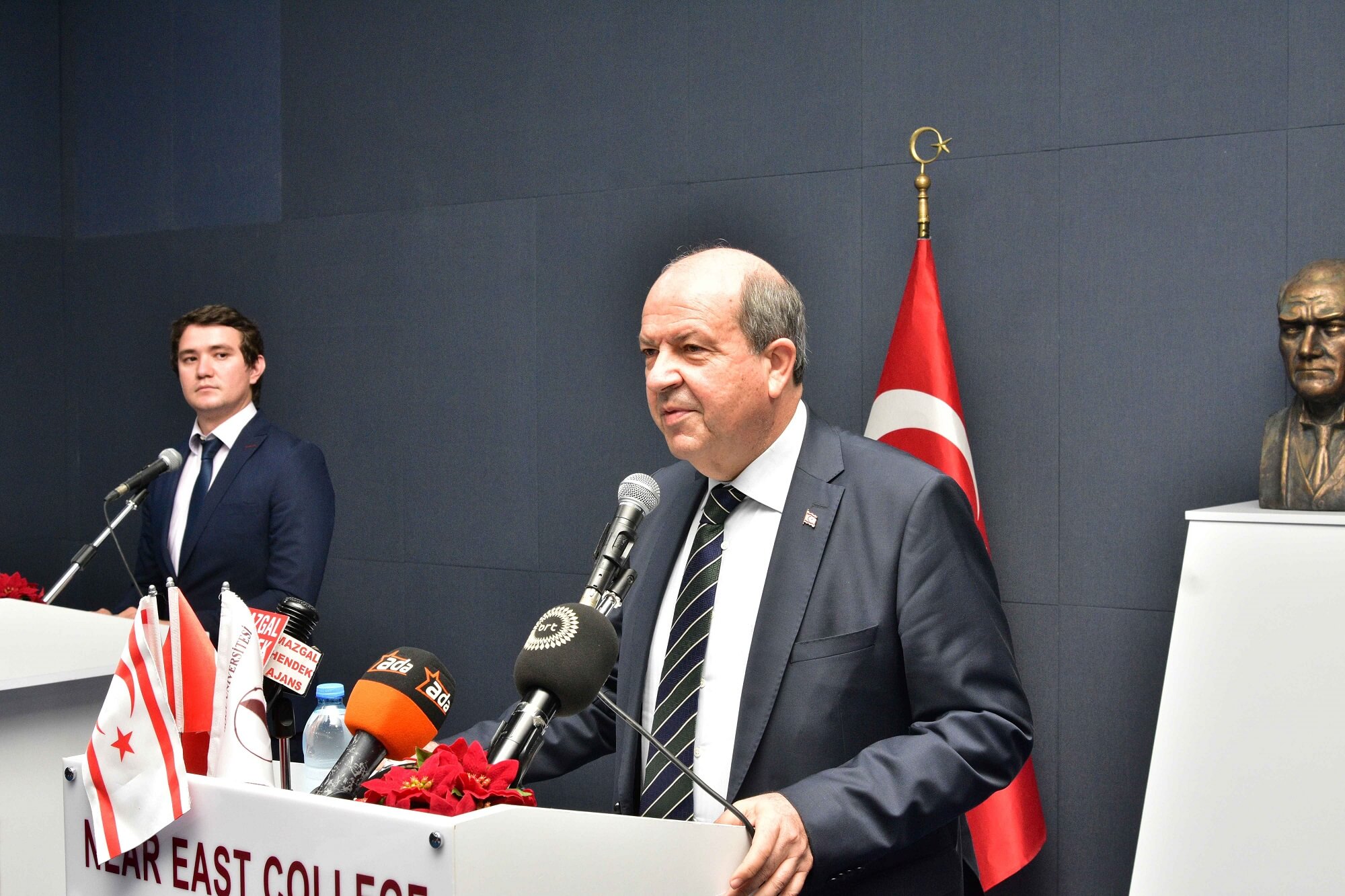 Underlining the importance of investments for the future and strengthening of the country, the President said, "Those who bring these investments to the country should be an example with their horizon and courage" and said that the equipment and education of the young people who will be educated at the Near East Yenibogaziçi Campus will be of great importance for the strengthening of the country. President Tatar wished the Günsel Family's contribution in all areas to continue and that the mission of protecting the TRNC would be strengthened.

President Tatar emphasizing that the Republic Day was celebrated with the participation of the President of the Republic of Turkey, Recep Tayyip Erdogan accompanied by a crowded delegation, emphasized that important messages were given to the world, and said "TRNC is not alone and has never been alone."

Stating that a solution in Cyprus can only be achieved on the basis of sovereign equality and a model based on cooperation, the President said, "We have announced to the whole world that the TRNC will continue on its way. The TRNC continues on its way determinedly with its institutions and organizations and infrastructure investments as a result of years of struggle. Today we are experiencing an example of this here with the opening of this magnificent place. I want to thank those who contributed." 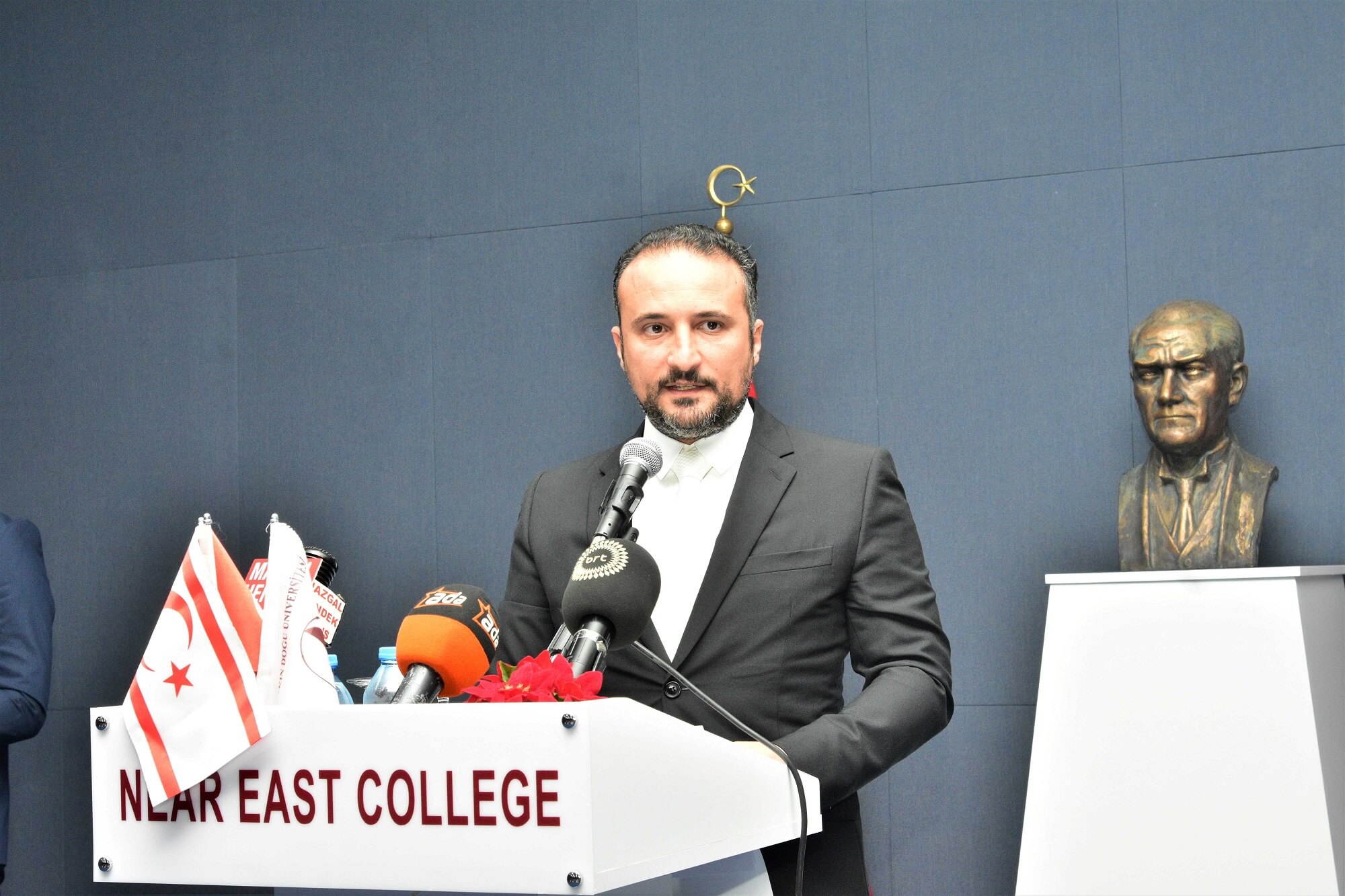 Prof. Dr. İrfan Suat Günsel: "We will continue to make the TRNC proud with the responsibility that the goal of enlightening the future of our country puts on our shoulders."

Near East University Chairman of the Board of Trustees Prof. Dr. İrfan Suat Günsel delivered the message of Founding Rector Dr. Suat İrfan Günsel at the beginning of his speech.

ın the message of Dr. Suat İrfan Günsel's, the following statements were included: "Educational institutions are a community loom. I wish our Yeniboğaziçi campus to be beneficial to the region and I express my love to you all."

Stating that they share a common joy on behalf of the Near East family, Prof. Dr. İrfan Suat Günsel said, “We are proud to open our Near East College Yeniboğaziçi Campus, which includes Nursery, Preschool, Primary School, College and Halil Günsel Culture and Congress Center.”

Stating that they are proud to have their mark under each value they have brought to the country in their 42-year history, Prof. Dr. Günsel mentioned that they provide great contributions and employment to the country in social, cultural, artistic and economic terms, especially in education.

Prof. Dr. İrfan Suat Günsel said: “Today, with our more than 6000 employees, the Near East family is the second biggest power in our island after our state, with its economic contribution to the Turkish Republic of Northern Cyprus. As the Near East family, we believe that the greatest source of strength of developed societies is the well-educated people. Our Near East College Yeniboğaziçi Campus, which we officially opened today, is also a product of this philosophy. "

"We will take the Near East experience to Kyrenia and Güzelyurt ..."
Emphasizing that they will carry the many years of experience of the Near East to all parts of the country, Near East University Chairman of the Board of Trustees Prof. Dr. İrfan Suat Günsel announced that they will start kindergarten and pre-school education on the campus to be opened in Kyrenia in February 2021. The primary, secondary and high school units on the Kyrenia Campus will start accepting students in September 2021, explaining that their next step will be the investment they will realize in Güzelyurt. Prof.Dr. Günsel stated that they will continue to spread the power of the Near East in the fields of education, arts and culture throughout the country.

Prof. Dr. Günsel said that as the Günsel Family, together with all the Near East institutions, they consider protecting our country's past, adding strength to its present and enlightening its future as their purpose of existence. Prof. Dr. İrfan Suat Günsel said: “The responsibility that we have put on our shoulders to enlighten the future of our country lies behind our determination to spread our education experience to the whole country, which we started with the Near East College Yeniboğaziçi Campus and will continue with Girne and Güzelyurt campus. For this reason, we are in an effort to make Near Eastern education accessible to all our people with the low fee policy we implement. "

Electric car GÜNSEL comes to the showcase of the world automotive market ...
Adding that this week, another pride will be experienced for the people of TRNC and the Near East Family, Prof. Dr. Irfan Suat Günsel said that GÜNSEL electric car which was entirely created through their own resources engineers and workers who spent 1.2 million hours of labor, will take place in the showcase of the automotive market in Turkey and presented to the World.

Saying "We will continue to work, produce and invest together to build a strong and hopeful future for our country and our people," Prof. Dr. İrfan Suat Günsel stated that they will continue to make TRNC proud with the leading role they have adopted. Prof. Dr. Günsel concluded his words with saying, "I wish our Near East Yeniboğaziçi Campus to be beneficial to our country, especially to the people of the region." 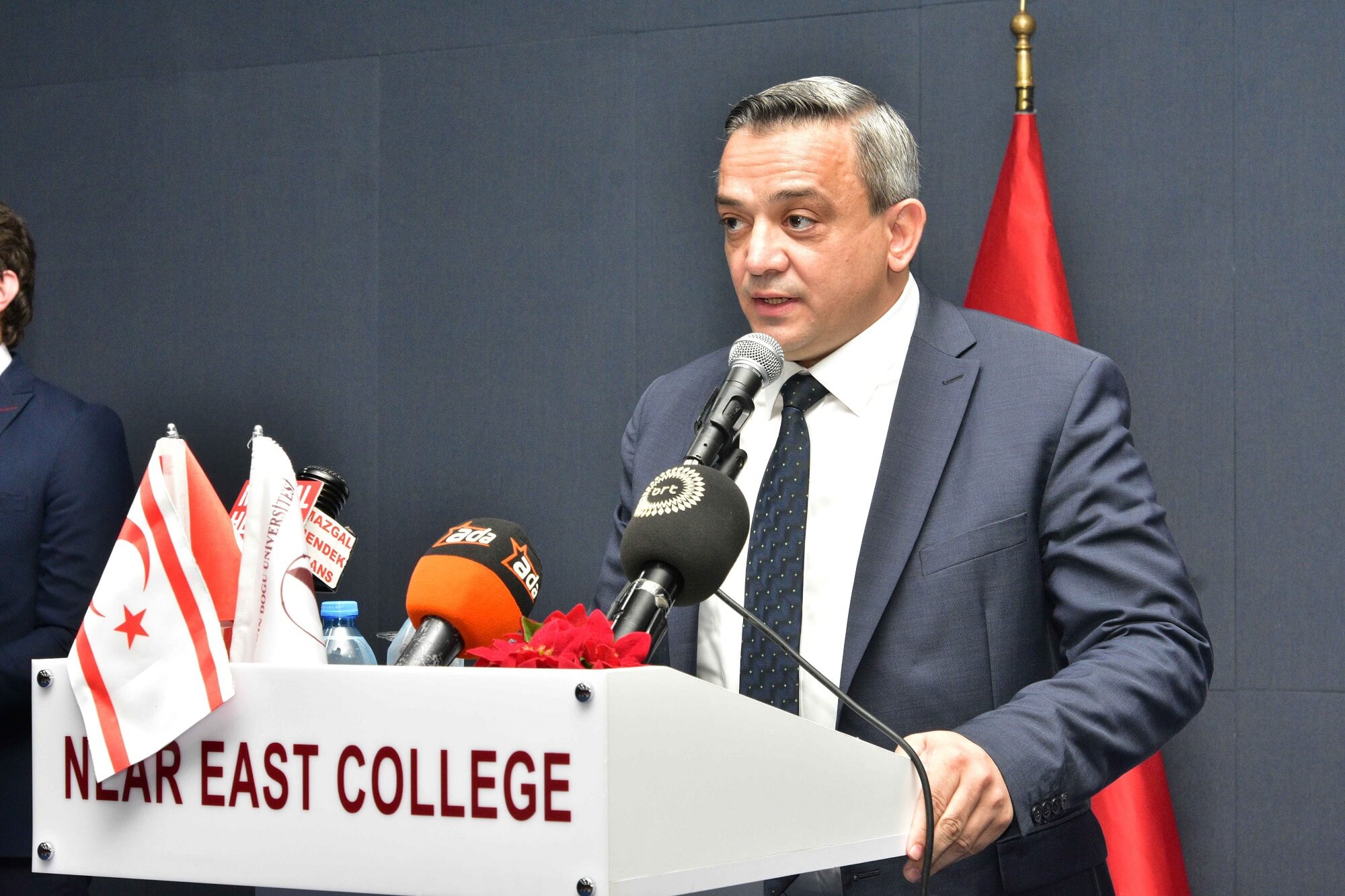 Assoc. Prof. Dr. Murat Tüzünkan: "Congratulations to the people of the region, to our country and to our children, by bringing this work to Yeniboğaziçi"
Vice-Rector for Near East Primary and Secondary Education Assoc. Prof. Dr. Murat Tüzünkan said that, with the campus that was opened, the Near East has taken its 42 years of experience and reassuring education to Yeniboğaziçi, İskele and Famagusta regions with its modern educational infrastructure.

Mentioning that they have implemented technological infrastructure, equipment and applications suitable for today's conditions within the framework of a student-oriented approach, Assoc. Prof. Dr. Murat Tüzünkan stated that they strive for the most effective communication between teachers, parents and students.

Assoc. Prof. Dr. Tüzünkan said: “The Günsel Family's investments in the field of education up to now touch the lives of children and young people, the most valuable asset of the country, from kindergarten to the university, and make them know various languages, know the world, intertwined with culture and art. The Near East mission aims to transform all these values into individuals and leaders of the future who feel responsible for their country and do not hesitate to take responsibility for their country.

Tüzünkan stated that the Near East College Boğaziçi Campus supports the development of its students not only with the high-level education opportunities it provides, but also with the culture and arts atmosphere it creates, and that the exhibitions, meetings and organizations to be held at the Halil Günsel Culture and Congress Center will ensure that students will be fully equipped socially as well as academic.

Asım İdris: "A country's culture, art, production and an example of creating the future with the determination of raising very good people found life ..."
Near East Secondary Education Director Asım İdris stated that they were happy to open a fully-equipped school in Yeniboğaziçi region during the foundation week of the Turkish Republic of Northern Cyprus.

Stating that being in the center of human is a Near Eastern tradition, Asım İdris said, “The Near East Family built hospitals for the health of people and educational institutions for the well-being of people. With the mission of being by producing, by producing domestic automobiles, it has implemented an understanding that enables existence not only in words but also in actions. Within the framework of this vision, we are trying to carry out our educational activities on the Near East Yeniboğaziçi campus.”

Reminding that Near East College Yeniboğaziçi Campus started education with more than 400 students, İdris stated that the campus was not only designed as a school, but that an initiative that led to the emergence of a society intimate with culture and art has come to life. Idris said, "It is not just the opening of a building here, it is the culture, art, production of a country aiming to create the future by raising very good people."

Ertan Aligüllü: "We realized the quality education dream of the people of the region..."
Near East Primary Education Head Ertan Aligüllü stated that the people of Famagusta region have been demanding and dreaming of an educational institution like the Near East to open up in the region for years and said that that dream has come true today.
Aligüllü said, "We are excited and happy to be for making the dreams of parents come true as a result of the quality education of the Near East and the value given to human beings."

Speaking about the establishment of the Near East College in the region, Aligüllü said that it is the initiative of the Günsel family which values and paves the way for its people, from education to all business areas across the country. Ertan Aligüllü said, “While we were assigned to work, we tried to create the only center that will set an example in the country with its educational programs and social activities."

Aligüllü stated that enrollment continues at Yeniboğaziçi campus and that this gives them strength and motivation and promised that they will bring quality and efficiency to the fore with the belief that every student is special. Explaining that a bilingual education model is applied in the education curriculum, Aligüllü stated that the third language is included in addition to the second language and that French is given to students aged 3-8.

Ertan Aligüllü said, “While the students are raised as individuals who are competent in both their native language and foreign languages, we will raise individuals who are equipped with mathematics, science, laboratory practices, and who are familiar with the music, painting, physical education, dance and yoga-mandala practices that are unique in the country”. He ended his speech by stating that every individual who graduates from Near East College has dreams of raising people who will have a successful say in education, arts and sports, who will contribute to the development in the region and the country in general. 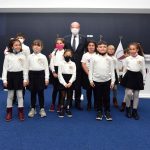 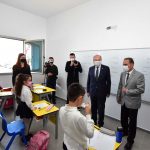 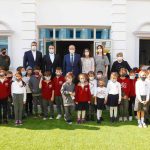 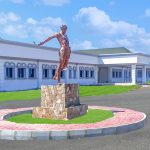